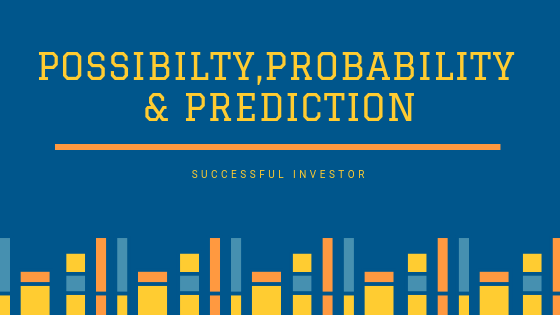 The 3Ps of capital market possibility, probability and prediction are completely different animals from one another but confusion and overconfidence often leads into massive losses in the hands of the investors.

As far as possibility is concerned in the market, everything is possible here. For example, can markets fall by 50 percent? The answer to this is, Yes, it’s possible. Another question is; Is it possible for the markets to go up by 100 percent by next year? Again the answer is a yes!

With uncertainty being the major ingredient of market, the universe of possibility is almost infinite.

But when it comes to predictions based on possibilities under the impact of biases(recency, availability and overconfidence) we come out with our predictions in black and white.

By black and white I mean we generally come out with exact nos. like nifty will give 15%, but in reality life lies in grey and not in black or white.

If we give probability to our predictions we can work with odds on our favour. For example if PE ratio is less than average of last 10 years then there is 70 percent probability of getting double digit returns in next 3 years.

So keep the odds in your favour and invest. Only then you will have high probability of becoming a successful investor.

Will keep on adding value to help u become a better investor.