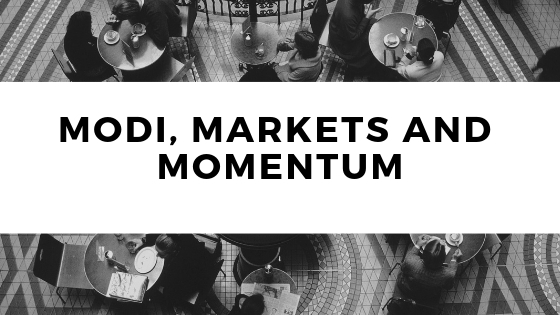 The opposition who was throwing everything possible on Modi seems to have lost its momentum in the absence of any strong issue which can strike a chord with voters of this biggest democracy.

Modi juggernaut which gained almost every part of the country barring southern part, started losing the momentum during the last year of its share of five years, BJP lost 3 major state elections in Hindi heartland with that Rahul Gandhi also started to gain some popularity.

With the incumbent losing the momentum at such a crucial juncture along with IL&FS fiasco had a huge negative impact on capital markets as people start sensing an unstable government at the centre, the market lost its way in 2018 with small and midcap indices going down up to the extent of 40 and 20 per cent respectively. But then came major air strikes at Balakot, which totally turned around the mood of the nation, not only Modi started again gaining popularity, the opposition started panicking in the absence of any major issue to take on nationalism agenda adopted by BJP.

With tailwinds coming from the global easing of liquidity post dovish comments from Fed Chairman and stimulus package announced by China, FIIs have started pouring in the money sensing stable government at the centre along with favourable global factors. Biggest beneficiary being quality mid and small-caps. I expect markets to build up from here and broader markets( mid and small cap) will outperform their larger cap peers with momentum likely to continue.