Why Modi Inspires Me 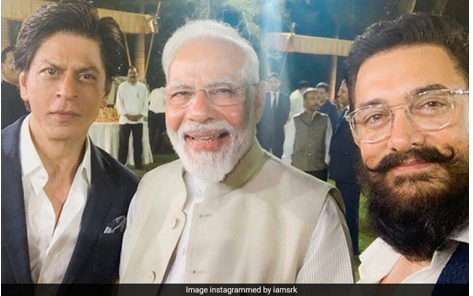 Leaders! Who are they? Are they actually born or are made too?
What according to you or me or all of us should a leader be like or what is common between the successful leaders that we see around us like Steeve Jobs, Bill Gates and Narendra Modi.
The most relevant answer to these would be that, all of them consider success to be an infinite game. They are disciplined, persistent and are patient enough to know that the results take time but they are going to turn into a reality and that is what they are sure of!.
These leaders not just plainly know how to be successful but they very well know how to remain one. They are well aware that consistent efforts and innovations are required to remain at the height.

Well, talking about the leader of the largest democracy, Narendra Damodardas Modi, for me stands right amongst the top of the list who not only has made at the top but has made it sure to sustain that place for a longer period of time.

We all have observed good leaders and businesses fall once they achieve their goal of reaching the top. Many of them either fall down or go sideways, the Anil Ambani group is one of such example we have. It can also be framed a one same as the tendency of that of a human, once you achieve your goal the aspirations and motivation generally go down and things start floundering.

Although, I am not a part of the Bhakt gang, still the journey of Modi inspires in developing a firm determination where the goal in itself is infinite; where all your stakeholders (employees plus shareholders) are your brand ambassadors, a system where all of them communicate freely with top management directly.

It was somewhere 15 years back, post the Godhra massacre, Narendra Modi was not welcomed at Delhi which was then being ruled by the intellectuals of Luteyan Delhi but with his sheer brilliance and consistent efforts in Gujrat, Modi made it to the top in one of the largest democracy of the world.
His promise of pradhan sewak connected him directly to the middle and lower class masses which accounts as the majority of votes in the country.

He is not only the 24*7 Prime Minister of the country but is always thinking about the next step or we can say the next election. He is not simply a successful leader but a very influential speaker too. He knows the publics’ sentiments and is well aware of where to strike and create a picture of his and his work in the mind of the masses.Be it his dominance exhibited during his handshake with Trump or him going in the southern attire with Chinese premier or ploughing at the beach or meeting the Bollywood bashers like Aamir and Sharukh khan, Modi is not only walking the talk but also diluting his bashers and that’s one of the reasons a person who was not acceptable in the country has so much of control over the Indian voters that almost whole opposition has surrendered.

His 24*7 hard work along with the long term goals in the mind is an ideal leadership quality for entrepreneurs like me, who need to implement ideas with hard work along with an eye on vision of the organisation and above all a business unlike to any other sport is an infinite game where the aim is to create an environment and ecosystem where people love to work and help the organisation to grow by implementing new ideas and that also consistently.