Mother of All Elections Part-1 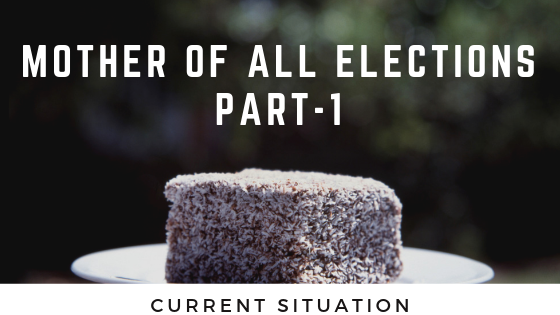 Though in India we keep on facing elections almost on monthly basis but we will have mother of all the elections in the month of April-May and they are the elections for the Lower House i.e. the Lok Sabha.

However, I hate the saying in the markets that “This time it’s different” but this time it is actually looking somewhat non familiar. The situation which was looking very easy for Modi led NDA in 2017, has now taken a big turn, especially after 3 State elections which the ruling party has lost. This has seriously impacted prospects of BJP in Hindi heartland.

Losing the momentum in the last phase really hurts, as the opposition has now started believing that PM Modi is not unbeatable, though Modi still remains the favourite. We are also observing that coalition partners have started to bargain and BJP is budging down on these demands.

3 State elections which India’s grand old party Congress has won was based only on sops like farm loan waiver.

Earlier, we have witnessed elections that were won on sops in southern part of the nation where parties used to promise gold, TV sets etc. Generally, bigger elections like Loksabha are fought on issues like development, corruption, employment etc. but this one seems to be going in a different way. Give aways and Sops are going be the theme in the elections this time.

Congress has already shown the intention of going towards farm loan waivers across India.

The duo of Shah and Modi must surely be planning something bigger weather it’s giving money directly in the hands of farmers or waiving loans.

Yesterday, we observed the parliament passing bill on the reservation for the economically weaker upper caste sections and have also heard that the government is also planning to give some money in the hands of BPL families.

Source of this information cannot be confirmed but this will definately poke the opposition to announce further promises if they come into power.

Though the fisc always gets impacted during the last year of elections but this election seems to be fought on destroying the fiscal prudence.

Its seems a race has now started between the parties of who can offer a bigger free lunch to Indian voters which definately is not a good sign for a fastest going democracy.

I will continue with this in my next article which will deal with the impact of the same on your portfolio.