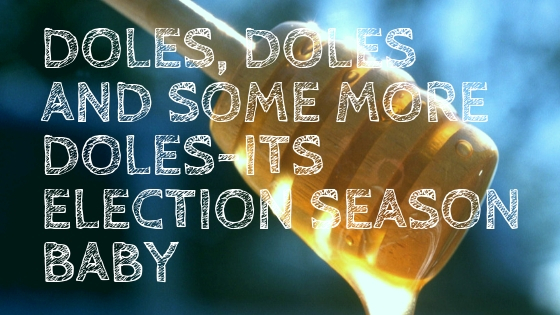 It is a no hidden fact that a majority of the youth of our nation needs a concrete source of bread & butter which a degree alone is not able to fulfill with the kind of population and pressure, the youth faces!
Life in today’s era is a roller coaster and the technology is advancing at supersonic speed so, the same must be applied at the political level too. The youth needs skill and development and not the doles being offered by our political parties. These doles will only transfer money from hardworking to hardly working.

With the high octane campaign for 2019 elections taking off, also marks a beginning of doles and jumlas and with only 2 weeks being left, the Congress has now come out with a minimum guaranteed income of 6000 per month to the 20% poorest Indian households. Let us now have a deep look on these political parties’ platters so as what do they have to offer in exchange of the votes of the ”aam janta” and its impact on the budget.
So, the cost of the scheme to the exchequer will approximately be 3.6 lac cr which will near about 13.4% of yearly govt budget allocation.

Although, the universal basic income schemes are catching up globally but, proposing something like this along with different type of subsidies will turn out to be pretty unsanitary for the fisc of the country. It has been quite long since our economy is struggling because of twin deficits; the fiscal and the current account deficit. Both of which have impacted in a negative manner to our country ratings despite the favorable economic growth and demography.

This free income offer, according to me, is a double-edged sword where on one side it will require more taxes which in turn will lead to high inflation within the economy and on the other side will lead to shrinkage of the labor force. Such an exercise will increase the cost of labor and thus will lead to higher inflation.

It’s not like that that we do not create enough jobs, but the lack of concerned skills required to meet the demands for the nature of such profile is lacking which ultimately leads to unemployment in the country. If people in power can create an environment which leads to skill building, and here I am talking about the concrete skill enhancement programmes and not just the namesake ones! With such real-time programmes coming into practice can lead bridging up the gap between the two and can solve multiple problems of poor fiscal health and unemployment.
However, the problem in designing such an ecosystem will require time and will not produce instant results too which in turn will not be very attractable for our political class. All they want as of now are immediate votes and for them, the nation’s development can very well take a back seat!