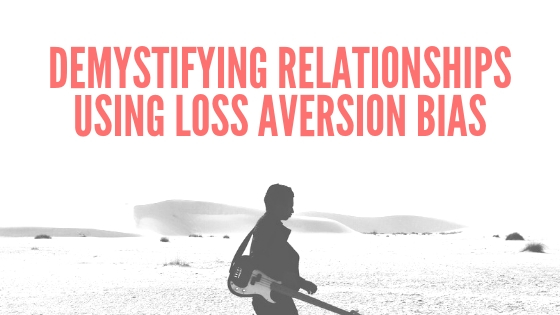 On the face of it, heading of this topic, connecting biasness with relationships does not seem to make any sense, but if we deep dive into human behaviour like Nobel laureate Daniel Kahneman, we would realise loss aversion is the bias which can predict the longevity of any relationship.

First of all, let’s try to understand what is loss aversion biasness,  loss aversion is basically people’s tendency where they prefer avoiding losses to acquiring equivalent gains: it is better to not lose Rs 100 than to gain Rs 100. As per some research losses are twice as powerful, for example, Rs 100 gain is equal to Rs 50 on the losing side i.e we will demand at least a gain of Rs 100 if there is a chance of losing Rs 50 in a bet.

Friendship: In our lifetime we make so many friends but hardly a handful of them continues for the long term, time constraint can be one issue but as there is one saying we can always find time for the people who are at the top of our priority list, Initially things go well and people enjoy each others company but as the time progress, small losses not necessarily monetary but can be emotional also can wipe out all the gains of the friendship, expecting more gains and benefits than losses is one of the major reason that causes friendships to break.

Partnership: As friendship, partnerships also gets broken very frequently , during the initial period say the first couple of years, lack of long term vision,  synergy and over expectation of gains causes partnerships to break, on the other side if we see an older partnership hardly breaks reason being fear of loss of reputation and networking build over the long term causes people to adjust even when they have to go against their will, here fear of loss compared to gain is binding the partnership.

Before moving into our third relationship that is marriage I would like to point out, there is one more bias,  availability bias which in tandem with loss aversion causes bigger damage in the above two mentioned relationships, what availability bias does is to force us to take decisions based on recent events and reliance on those things which we can immediately think of. So a recent problem between the partners or friends can really prove to be fatal on the relationship.

Marriage: Here Loss aversion plays an altogether different role where it causes people to stick to the relationship despite differences. What happens due to societal pressure, the responsibility of kids and insecurity causes people to continue in relationships. Here we can see the difference in India and western countries where there is lack of societal pressure and less responsibility of kids(low birthrate) along with less insecurity due to working spouses, causes more divorces in the western world than in India.

Sometimes it gets very interesting to apply your studies in relationships, tried my best but as there is saying feedback is your best teacher, please do give your feedback.