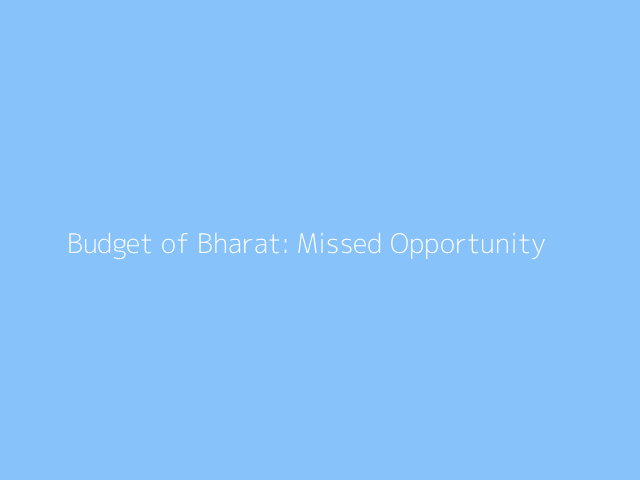 After the decisive mandate received during the Lok Sabha elections, it was expected that the Modi govt. 2.0 will provide enough firepower to generate the animal spirit in the economy which already is going through one of the worst phases.

Against all the expectations, our new finance minister Nirmala sitharaman chose play a safe budget which, on face of it looks more like a socialist one with a long term vision rather than such which was much required to kick start the dwindling economy in a very short term.

Let’s just quickly have an inside dig on the highlights of the budget 2019.

1. Fiscal Under Control: Despite being the economy in a very bad shape, the FM has not gone overboard and has stuck to the fiscal prudence and has infact stepped up a ladder by reducing deficit target to 3.3 per cent.

2. Incentives for electrical vehicles: Sticking to green push, this government has stood by its environment-friendly incentives by offering a deduction of 1.5 lacs.

3. NBFC Crisis: With the HFC’s struggling to get liquidity, the buyback of quality loans by banks and RBI as their new regulator will hopefully bring some stability in the market.

4. CPSE as ELSS: To give push to divestment the CPSE will now get all the benefits of ELSS.

5. Reduction in Corporate Tax: For smaller businesses tax has been reduced to 25 Percent. It will prove to be very fruitful for small business houses.

1. Increase in a minimum public float: Increasing the minimum float from 25 to 35 percent will bring in almost 4 lac crore new securities in the market. The new supply is very likely to depress the overall value of shares.

2. Funding of fisc using capital from abroad: The government has decided to find a portion of borrowing from capital raised from abroad and by doing so, will increase the risk in case of currency devaluation.

3. Super Rich Tax: Increasing tax surcharge on 2 crores or above is going to create negative vibe within the market.

4. Taxation on Buyback: 20 percent tax on the buyback of shares is a big turnoff for stock markets.

5. Excise on Fuel: The increase of excise duty by Re. 1 on Fuel will have a negative impact on middle class and can also be inflationary.

Now, having discussed all the whites and greys the overall budget looks more of safe and a balanced one. The same could have been great if our economy was in a growth mode but, keeping in mind the struggling economy this budget is more of a waste opportunity having such a huge mandate.

As far as markets are concerned, it is negative for equity markets in a short run whereas the decision to stick to fiscal prudence will pull the yields down and will prove to be fruitful for the debt market.